J.J. Román Varela. Born in Málaga (Spain) from Asturian descent. His passion for scratch, electronic music and beats takes him to enter the Spanish DJ battle scene in 1999. Three years later he decides to organize DJ battles and alternative events to improve and boost the turntablist scene. The ITF / IDA (International Turntablist Federation / International Deejay Association) then delegates to him the organization and production of all their events Spain. Soon after he achieves to showcase for the first time the elite of World turntablism scene in Spain.
Thanks to the success of the spanish ITF, already under his command, arrives the collaboration and sponsorship of the Redbull Music Academy, working as a link between the DJ´s and the brand, showing them new talents. In 2010 he starts a new stage dedicated exclusively to music production and sound design for shortfilms, AV projects and live acts.
In 2011 before an attempt to move to LA he creates Hasta La Vista Records netlabel to distribute his work within Blue Rhino. The band splits in 2012.

In 2013 Seven Souls is born.
The name comes from a Material track featuring the electronic music pioneer Tim Simenon and the late experimental writer William S. Burroughs.
The main purpose of Seven Souls is to create cinematic landscapes through sound and music, making use of electronic instruments and computers.
His knowledge and passion for videogames, digital art and computer code brings him directly inside the video game industry as lead musician and sound designer. He continues using Hasta La Vista Records as a platform to distribute his original music worldwide while collaborating with other artists. 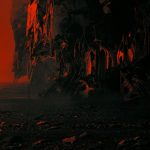